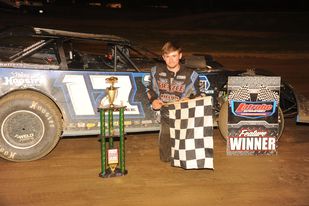 Justin Dudek2022-08-08T10:15:40-04:00
By Justin Dudek
ShareTweet
LATROBE, PA (July 30, 2022) – Ryan Frazee and Michael Duritsky split the $1500 to win twin 20’s for the K2 Engineering Crate Late Models at Latrobe Speedway on Saturday night. Brandon Myers won a career first in the Stone & Co Modified 4 Cylinders while Marty Spade won his first of season in the Special T Metals Pro Stocks. Stephen Hazlett won for the second time this season in the Joe’s Body Shop Pure Stocks with Joe Jacobs earning his sixth win in the Seal Tite Strictly Stock 4 Cylinders.
The first of the two twin 20’s for the K2 Engineering Crate Late Models got the night started. Clate Copeman jumped out to the lead as the green flew. Copeman had Michael Duritsky and Ryan Frazee tucked in behind him. Copeman looked fast out front as Duritsky closed in on the leader when a yellow flew on lap nine. The following lap Duritsky got by and led for three laps when contact on lap 12 saw both drivers spin and sent to the tail. This handed the lead over to Ryan Frazee who drove home the final eight laps to pick up his third of the season. John Over was second followed by Troy Shields, Michael Duritsky, Braeden Dillinger, Michael Ott, Joe Zulisky, Zach Herring, Jay McCracken and Eric Asmussen. Qualifying heats went to Dillinger and Copeman. 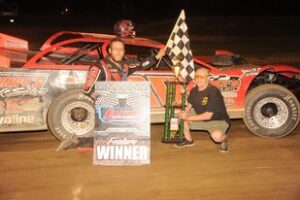 Marty Spade used his pole starting spot to lead all 15-laps of the Special T Metals Pro Stock feature. Spade pulled away from the pack and never looked back in taking his first win of the season and first since September of 2020. Tommy Dembowski, Brandon Doland, Joe Kelley, Casey Fleegle and Jacob Weyer. Spade also won the heat. 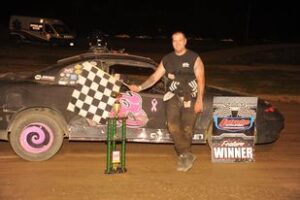 Stephen Hazlett waisted no time grabbing the lead over EJ Rozak at the start of the 12-lap Joe’s Body Shop Pure Stock A-Main. Hazlett drove away as a battle was going on for the next four positions. Rozak was holding off the advances of Joey Koteles while Anthony Monteparte was watching. On lap nine the pair seemed to touch and get high in turn two and Monteparte pounced on both of them to take the runnerup spot. By this time Hazlett had driven off to a big lead and came home with his second win of the season. Monteparte was second followed by Joey Koteles, Corey Faris, Justin Ruff, John Cain, Jim Zufall, Tim Weiner, Tim Neiderhiser and Andrew Geary. Heat wins went to Monteparte and Hazlett. 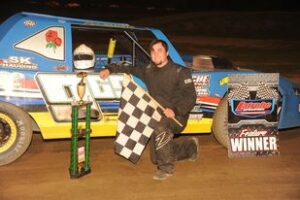 Paul Koffler III looked to be well on his way to another win in the Stone & Co. Modified 4 Cylinders. Koffler led the first half of the feature before slowing down the back straight. Andrew Jones then inherited the top spot and took off when the green flew. Another caution slowed the pace on lap nine. Jones continued his lead when the green reappeared and was holding off Brandon Myers and Tyler Huffman in a fantastic battle as the exchanged the lead on the white flag lap. When they headed into the final two turns Jones and Huffman went high and Brandon Myers shot low coming out of four. The drag race to the finish saw Brandon Myers earning himself a joyous career first win. Andrew Jones, Tyler Huffman, Wyatt Piper, Colton McNaney, Jeremy Grubbs, Brad Vargovich, Shawn Ghrist, Chris Myers and Tiffani McElhose rounded out the top ten. 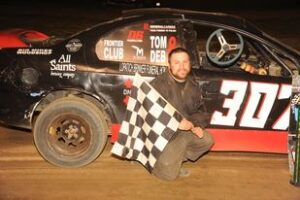 The final event of the night was the second twin 20 for the K2 Engineering Crate Late Models. The second race was all Michael Duritsky. Duritsky had a sizeable lead when the yellow flew on lap twelve. This closed up the field but second place Braeden Dillinger had nothing for the rail riding Duritsky, who won for the fourth time, took the checker with Dillinger following. Third through tenth were John Over, Troy Shields, Zach Herring, Ryan Frazee, Noah Brunell, Eric Asmussen, Jay McCracken and Joe Zulisky. 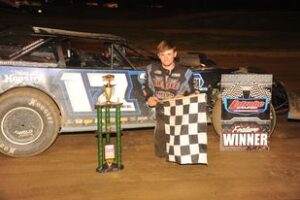