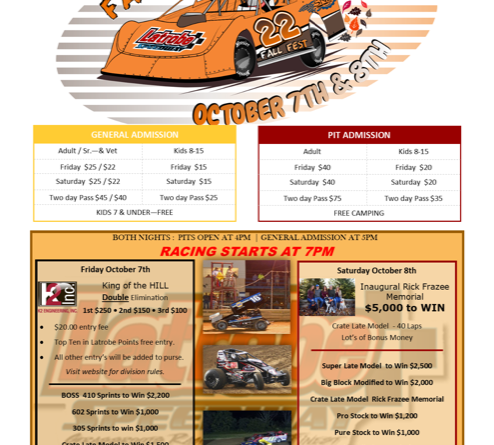 It’s that time of year,  all points racing is over Champions have been crown!

Now it’s time to RACE and have fun.  Come out and join us for Fall Fest 2022.  Friday Night Racing will be Headlined with the B.O.S.S 410 Sprints, this will be their first time at the Big Half Mile.  They will be joined by the 602 crate Wingless Sprints as well the Allegheny Sprints 305 Racesaver Sprints.  Along with Latrobe’s own K2 Engineering Crate Late Model and Stone & Co Modified 4 Cylinders.  After the features we will Sort out the King of the Hill with the Crate Late Models Sponsored by K2 Engineering.

Saturday Racing will be Headlined with the Inaugural Rick Frazee Memorial 40 Laps $5,000 to win Crate Late Model.  Along with the Return of Super Late Model and The Ground Pounding Big Block Modified. On the card as well Penn Ohio Pro Stocks, Pure Stocks and Modified 4 Cylinders.

There will be plenty of awesome door to door racing action all weekend at the Big Half Mile Dirt Oval.

No slides found, please add at least one Slide Template to the choosen language.