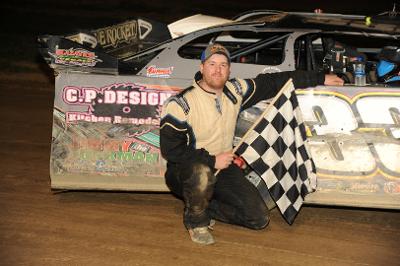 admin2020-09-07T08:04:40-04:00
By admin
ShareTweet
Also winning features where Andrew Koenig in the FASTRAK Late Models, Chris Schneider in the Pro Stocks, Anthony Montepart in the Pure Stocks and Matt Weltz in the four cylinders
Kenny Scheldenbrand and Mike Pegher bought the Super Late Model feature onto the track.  At the drop of the green, Scheldenbrand jumped out to the lead, but in the fourth turn, Scheldenbrand got lose and Pegher made slight contact and Scheldenbrand went around.  Once the green came out, Pegher jumped into the lead with Alex Ferree and Tommy Beck in tow.  Pegher would lead the first 12 laps, but on lap 13, Ferree would move around Pegher and take the lead.  Ferreee would go on and lead the distance to take the win in the American Die Cast, Cornett Engines Rocket.  Matt lux would finish second followed by Pegher, Beck and Scheldenbrand rojunding out the top five.  Rounding out the top 10 was Clinton Hersh, Drake Troutman, Clate Copeman, Matt Sponaugle and Deshawn Gingerich.  Rounding out the field was Jon Lee, Jayme Beck, Levi Yetter, Matt Sala, John Weaver and Daniel Angellicio.  Mike Pegher and Tommy Beck won the heat races amd Mike Pegher set the fast time in qualifing.
Andrew Koenig and Bob Schwartzmiller brought the FASTRAK Late Models out for their feature event.  Koenig would take advantage of starting on the frontrow and jump out to the lead with Schwartzmiller and Russell Baird Jr. in tow.  The best battle on the track was between Baird, Ryan Frazzee, Braeden Dillenger and Troy Shields for third place.  Koenig would lead all 20 laps, but coming off turn number for the checkered flag, the tie rod would break and Schwartzmiller would close up to the bumper, but Koenig would take the win aboard the Latrobe Chevrolet Rocket.  Schwartzmiller would finish second with a flat left front tire, Baird was third, Dillenger was fourth and Shields was fifth.  Frazzee was sixth followed by John Over in seventh, Vince Masi in eighth, Clate Copeman was ninth and Joe Zulisky in tenth.  Dillenger and Frazzee would win the heat races.
Ray Hickok Jr. and Chris Schneider would lead the Pro Stock feature on the track. At the drop of the green, Schneider would jump out to the lead with Hickok and Joe Kelly in tow.  Schneider, making his debut for the Fosnaught racing tream would go on and dominate the feature and pick up his second straight win.  Hickok would finish second, but would collect the $750 bonus for being the highest finishing driver who has competed in at least half the race from Laurel Machinery.  Third would be Joe Kelley, Cam Kraisinger in fojurth and Tommy Dembowski would finish fifth.  Rounding out the field was Barry Farris, Martin Spade, Brett Hutira, Bill Slade, Joey Kotelas and Steve Mitchell.  Schneider and Hickok won the heat races.
Stephan Hazlett and Brian Savino brought the Charger feature on to the track.  At the drop of the green, Savino would jumped out to the lead with a rash of early cautions eliminating some of the top cars including Chris Hickok.  Once the racing got on it way, Savino would lead with Anthony Montepart and John Hollis in tow.  On lap number eight, Montepart would gain the lead by passing Savino and then Savino would be caught up in a crash.  Once back under green, Stephan Hazlett would be in second and put pressure on Monteparte, but Montepart would take the win in the 66 Auto Supply, Gilmore Engineering Chevrolet.  Hazlett would finish a career best second followed by Jim Hixson, John Hollis in fourth and Savino in fifth  Rounding out the field was Jacob Weyer, Jim Zufall, Nathan Howe, Shawn McGinus, Sam McAdams, Brandon Dolland, Chris Hickok, Dakota Hixson, Justin Ruff and EJ Rozak.  Hickok and Montepart won the heat races.
Jeremy Grubbs and Matt Weltz brought the 4 cylinder feature onto the track.  Weltz would jump out to the early lead with Jack Theys and David Friend in tow.  Once Weltz got into the lead, he was able to use the track and go on to pick up the win.  Theys would finish second with Dale Grubbs finishing third, Paul Koefler Jr in fourth and Tiffany McElhose in fifth.  Jason Rittenour in sixth, Dylan Burkett in seventh, David Needham in eighth, Dylan Hichok in ninth and Joe Kause in tenth.  Rounding out the field was Josh Grubbs, Brian Noel, CJ Parrill, Dan Leonard, Brendan Hazlett, Jeff Burns, Larry Weltz, Justin Connors, Jjmmy Roberts, David Friend, Jimmy Noel, Jeremy Grubbs, and Joe Huffman.  Matt Weltz, Paul Koeffler III and Jeremy Grubbs won the heat races.